8k resolution… Overkill… Who needs all of that resolution? There goes RED again, putting out some new camera with monster resolution that nobody needs…

I find it a bit funny. In the stills world, or even the phone camera world (if we want to relate it to the general public), it seems generally accepted that a higher megapixel count will result in a cleaner image, among many other things, but in the motion world there always seems to be some resistance when moving into higher resolution.

Whether someone acknowledges it, or is even cognizant about it, they have probably realized the benefits of “oversampling,” or “supersampling,” when posting an image to Facebook, or Instagram. Even with the horrible compression of the two platforms, an oversampled image will result in an overall “better,” or “cleaner” looking post on these platforms. It’s safe to say that this is fact. For whatever reason, on the motion side of things, the benefits of oversampling, or supersampling, are not as accepted as they are in the stills world. Even when a portion of the deliverables that my clients get are still at 1080, the benefits of oversampling are indisputable, and I personally wouldn’t have it any other way. Overkill? Not at all. Glorious gradient transitions, a more natural representation of details, better contrast representation, smoother representations of curvilinear objects, higher resolution (perceived, or actual), lower noise, better Dynamic range, the feeling like you are peering through a window to the “real world,” etc., etc. – YES! Again – this is all there, even when downsampling to 1080, and this is not a joke, or a gimmick…

I watched the naysaying happen with the RED One, Epic, etc… When I put down a deposit on the Scarlet MX on the November 3rd announcement date in 2011 (furiously hitting refresh on the product page because of overloaded servers), I had a colleague at the college that I taught at ask me – “why would you want to do that, you could buy 6 Canon 5D cameras with that kind of money?” I thought he was crazy, thinking that 6 horrible Canon compression schemes would be worth more than one RAW shooting REDCODE motion camera, and couldn’t wait to get the Scarlet. After having a taste of shooting RAW motion with the RED One, and attending REDucation in Hollywood, CA in 2010, I knew that this was the future. Not only that, coming from the stills world, shooting RAW, I knew the benefits, and having that kind of information accessible in motion was an absolute game changer. Fast forward a number of years, and that same colleague is asking to use my Weapon, and does on occasion – oh, how times change. 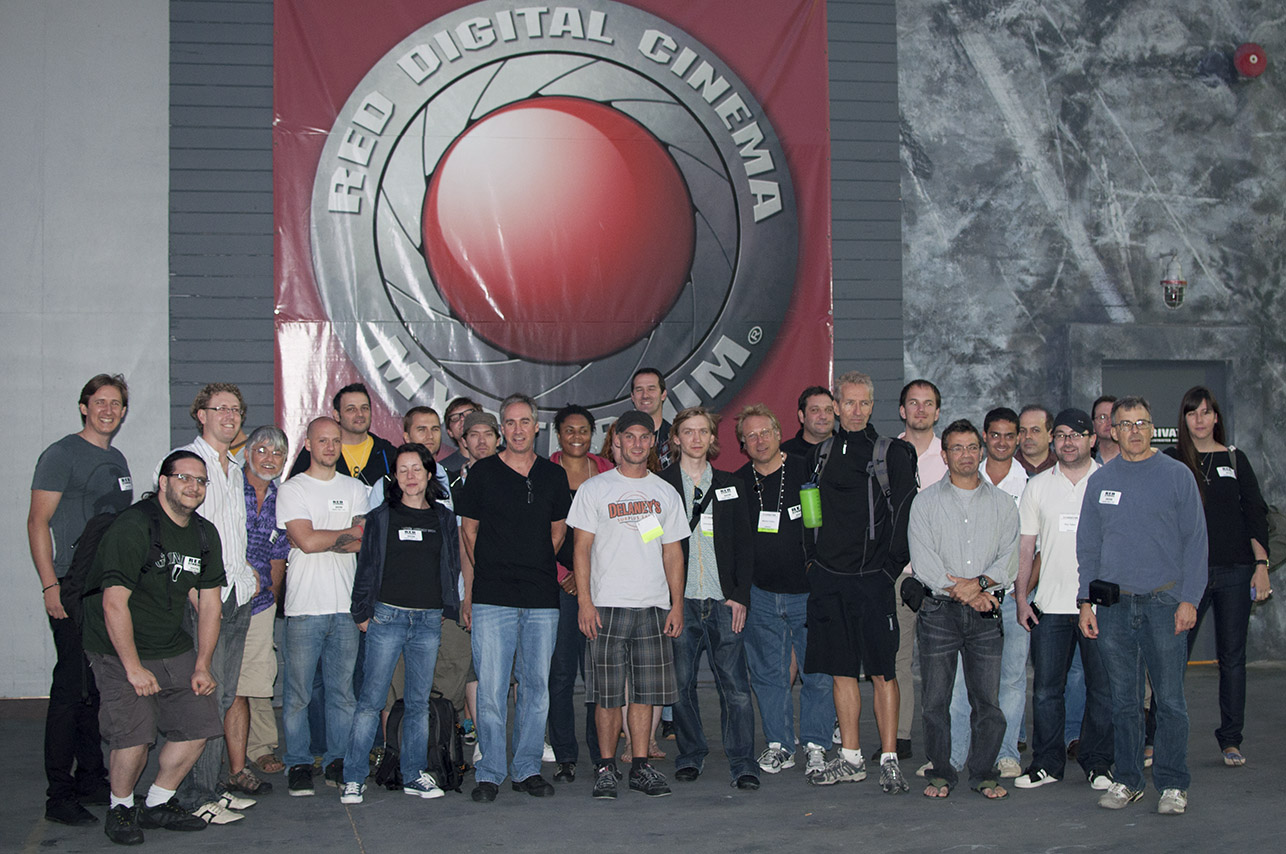 “Benefits of shooting 8k go beyond the headline resolution figure. 8k gives you better MTF at all frequencies, so you get a better representation of contrast which is visible even after downsampling. 8k means you get smoother more natural representation of details because you’re much more likely to be oversampling that detail. Because many people will be downsampling the 8k to 2k or 4k you’ll get lower noise still, and the noise character of the Helium sensor is very friendly.”
(Graeme Natress)

We can go back even further, and ask – “why 4k”? In the quest to make digital a “film replacement,” 4k was the initial goal. Of course, there are variables, but Super 35mm film generally yields a sub 4k print (though the goal of digital was 4k), and the problem with 1080 HD was that it fell short in resolution (among many other things) as a film “replacement.”

“In projection of print terms, 35mm is sub 4k, and dependent upon actual print and projector circumstances sub-HD. A typical cinema projection of a distribution film print will offer no better resolution than an HD digital projection, probably less.”
(Graeme Natress)

Some may take the rationale – “I’m not shooting Hollywood feature films, why would I need that kind of resolution?” It’s not just about high end Hollywood productions – everything looks better in higher resolution… I just shot a few corporate pieces in 8k (delivered in 1080), and the clients were absolutely amazed by the vast difference vs their previous projects shot on a Canon DSLR in 1080. This is, or course, not only a result of the supersampled resolution, it is dynamic range, color, etc., but there is definitely something about an image shot at 8k resolution.

The Hummingbird Moth is a very interesting creature. I was initially confused, and wondered if it was a hummingbird. The Hummingbird Moth, known as a Hummingbird Hawk Moth in Europe, is an example of Convergent Evolution and utilizes a proboscis while hovering to feed. Shot at 4.5k WS at around 130fps, on the RED Weapon Helium, with the Leica M 75mm APO.

Had a few minutes to play around with the RED Weapon Helium 8k, and an IR OLPF from Kipper Tie yesterday. I used the 28mm Leica Summilux M for this shot – this little lens hasn’t really left the camera. Shown below with a 67mm Formatt-Hitech 3.0 ND via step up ring. 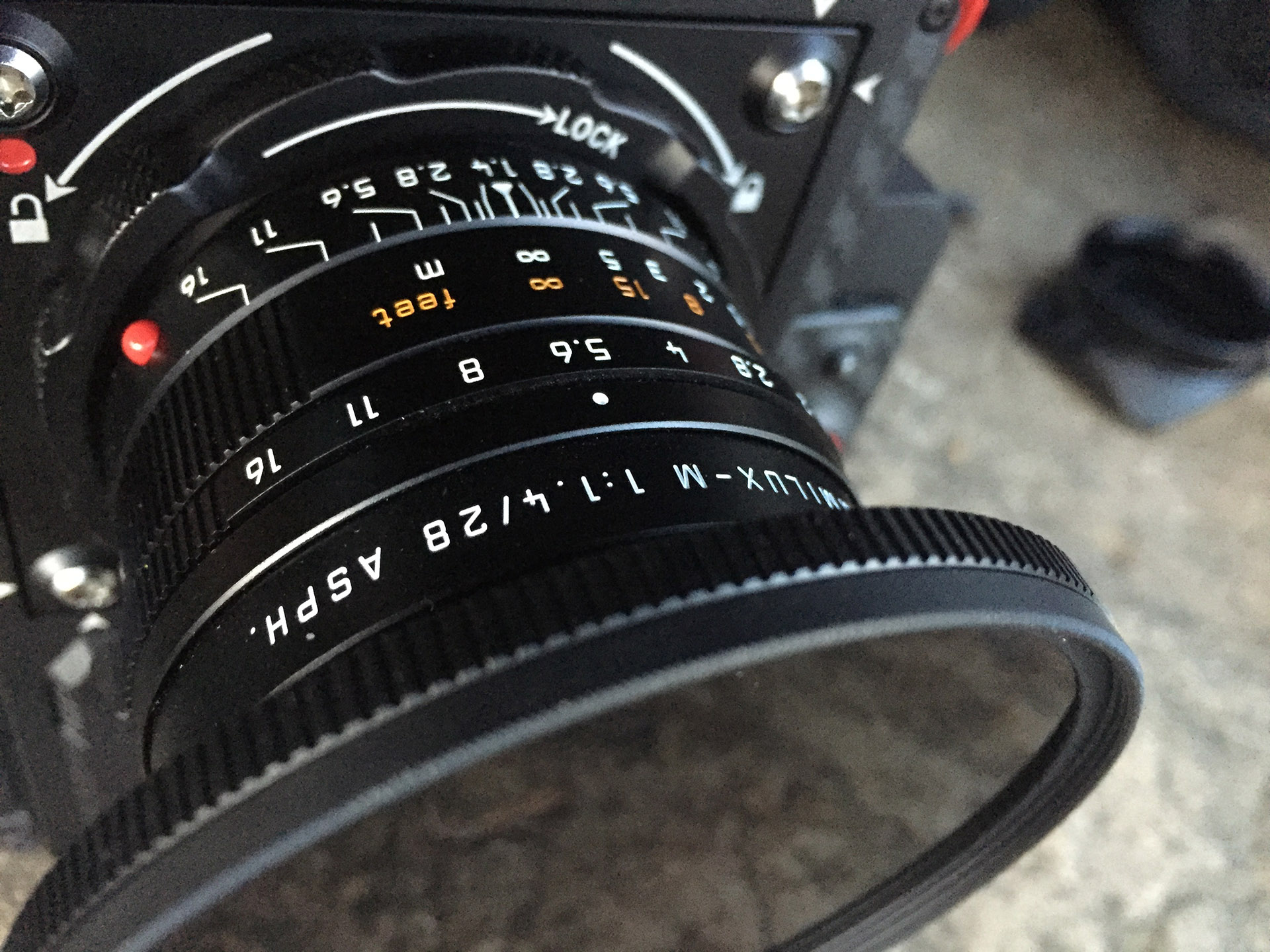 I love this lens on the Helium, and it exhibits none of the problems that exist with many of the wider Leica M lenses, and of course has the signature Leica look that I have grown to love on the M240. I’ve had an M mount since the Scarlet MX days, but none of the wider lenses that I tried were acceptable to me at full resolution. The 50mm Summilux ASPH, and 75mm Summicron APO were always solid performers, but anything wider that I had previously resulted in purple/magenta corners, and focus smearing in the corners. I’m not quite sure if it is the design of the 28 Lux that allows the solid performance, or if it is something that has changed with the Helium sensor/optical glass, either way, this is a compact force to be reckoned with.

More to come with the Kipper Tie IR OLPF…

Had the pleasure of shooting a profile piece for the talented Lou Shields. Shot on the RED Epic Dragon, at the Norskedalen Nature and Heritage Center, in the Driftless region of Wisconsin. Lou plays Americana, Old Time Blues, Folk and American Roots, and tours internationally.

The location was sublime, and the weather was perfect, affording a nice Time Lapse in the early morning, then clearing to a beautiful sunny Wisconsin day. This was shortly after my Dragon sensor upgrade, so I was definitely ready to put it through it’s paces. 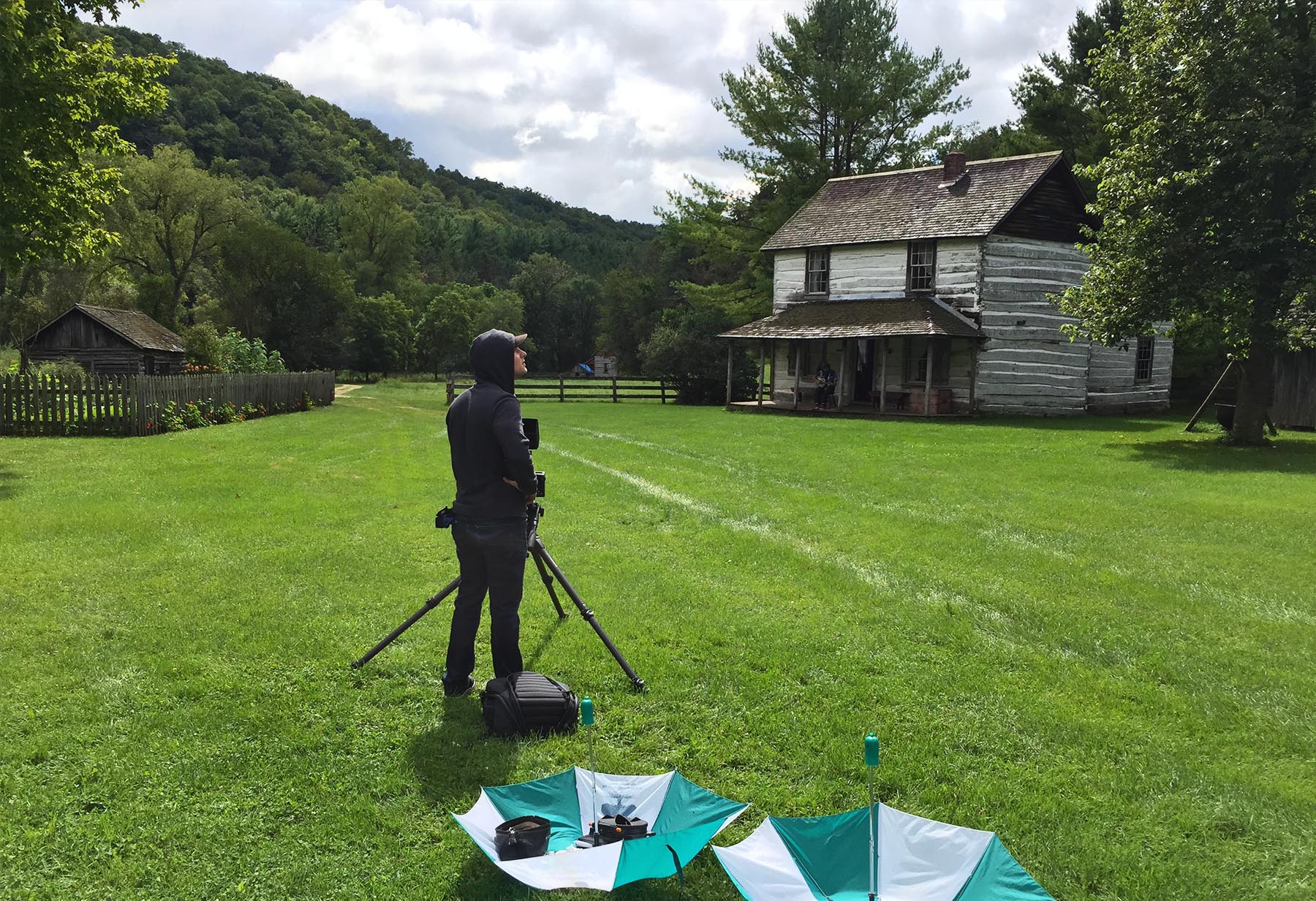 This was a “one man band” day, save for my Audio Engineer, and two producers in order to work within budget. Shot on location, over an 11-12 hour day – the pace was challenging, but that’s something that I love, and there’s nothing like the satisfaction of getting what you need with a skeleton crew. Shot on the Epic Dragon with Zeiss ZE primes, on sticks, and utilizing the Seven Jib.

The most challenging part of this shoot was utilizing live sound for each song. I had discussed with Lou, utilizing a pre-recorded version of each specific song, so that sync would be a breeze. Lou wanted to do each take live, so we opted to take that route, with multiple takes from various angles. This made editing more of a challenge because of natural variances in musical takes, but it turned out quite well, and you’d never know the difference. There were a couple of challenging sections, where matching the edit between takes was a bit more challenging, but overall, the difficulty was minimal. 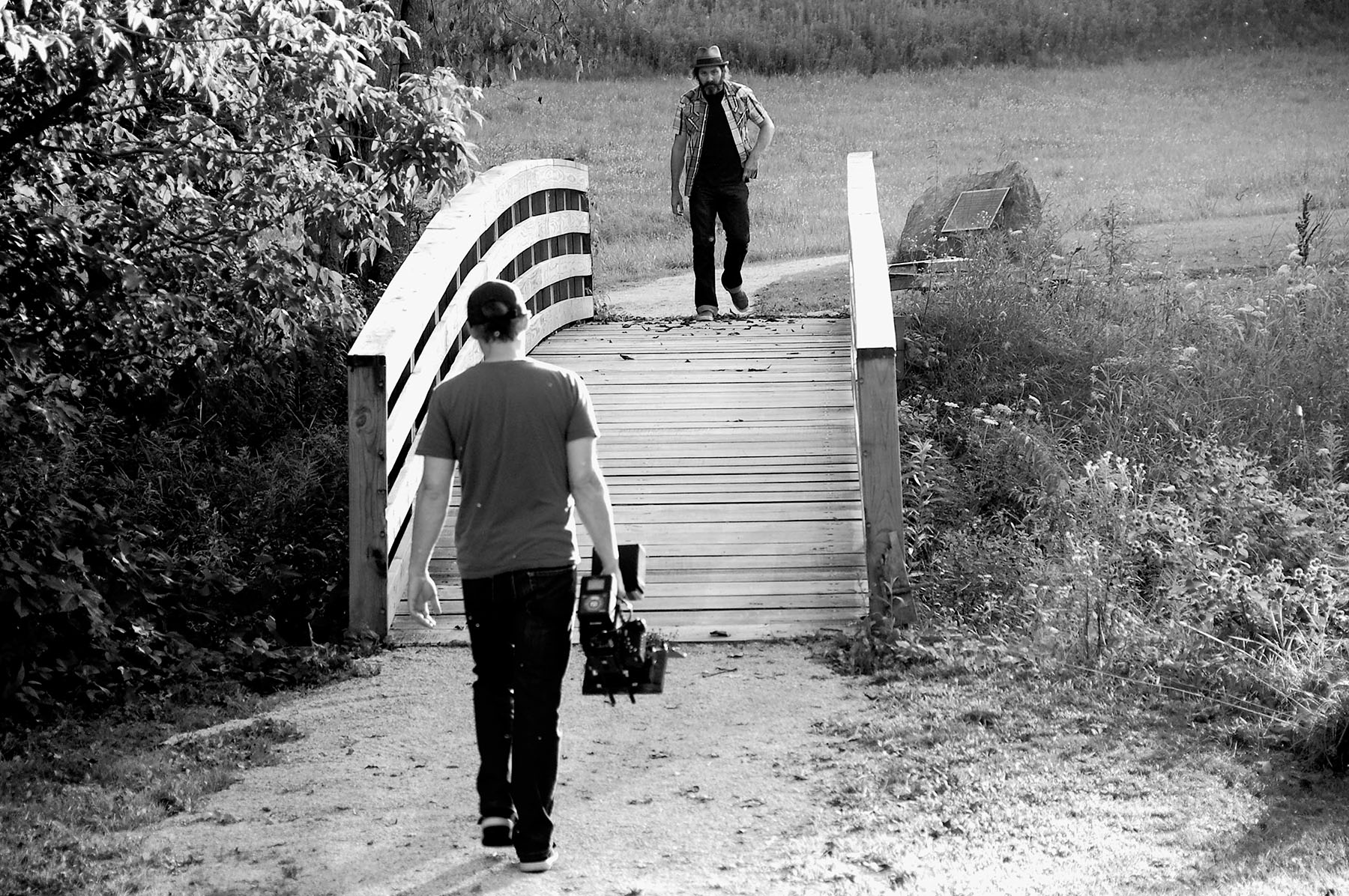